AMCHAM’s Karnataka Chapter, in partnership with KPMG, hosted the second session of the CEO Breakfast Series on the topic of ‘Leadership in Uncertain Times’ on June 30th at White Box, Hyatt Centric, Bengaluru. Barely two decades into the second millennia, the world has been confronted with an uncertain future. The Arctic ice is melting faster than ever before. A nuclear Armageddon is no longer just a war game scenario, but a real possibility. Deadly viruses and bacteria are evolving faster than we can develop a cure. The internet has made the world smaller, but also more vulnerable. With the entire world online, it may take just a pulling of the virtual plug to plunge it into darkness and chaos. By all accounts, the future looks increasingly uncertain and insecure. This interactive session featured speaker Mr. Tobby Simon, Founder & President, Synergia Foundation, a strategic think tank which works to develop impactful insights in areas of geo-economics, geo politics and geo-security. The session helped attendees understand key challenges faced by business enterprises, how organizations can respond to systemic challenges including fragmented global supply chains and solutions for problems that seem intractable. The session was attended by leaders from Nike, AO Smith, Parexel, Kewaunee, Swagelok and more. 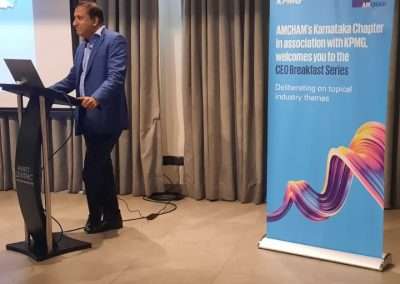