CAPT Michael Farmer, Chief, Office of Defense Cooperation (ODC), U.S. Embassy and Mr. Nilesh Christian, Deputy Chief, Office of Defense Cooperation (ODC), U.S. Embassy also joined the deliberations. Ms. Arun opened up the discussions with a welcome to RDML Baker and took participants through the agenda for the meeting which included the re-scheduled DefExpo 2022 in the context of foreign participation. Members also shared their participation numbers of the rescheduled event and confirmed that they would be present even if not in large numbers. Ms. Arun shared about the AMCHAM led events planned for U.S. industry and what could be delivered. The embassy team shared details of the visiting delegation from the U.S. government. 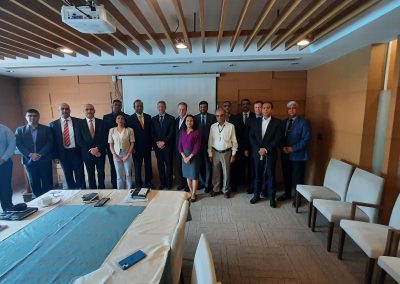