AMCHAM’s Tamil Nadu Chapter held a breakfast meeting on March 28th, 2019 in Chennai, on the topic of ‘Making Sense of Opinion Polls’ with guest speaker Dr. Rajeeva Laxman Karandikar, Director, Chennai Mathematical Institute. India is in the midst of the 2019 general election spread over 7 phases. To understand how opinion polls predict likely outcomes and to get a sense of the mood of the electorate, the Tamil Nadu Chapter Executive Committee invited Dr. Rajeeva Laxman Karandikar, Director of the Chennai Mathematical Institute, one of India’s best known psephologists, to give a presentation.

The meeting began with opening remarks by Mr. R. Ramkumar, Chairman – Tamil Nadu Chapter, AMCHAM and Mr. Rajan Aiyer, Vice Chairman – Tamil Nadu Chapter, AMCHAM was present at the meeting. Dr. Rajeeva Karandikar began his presentation by asking how a sample size of 20,000 voters could give an idea about the mood of the national electorate. He said that the number of registered voters in India has been increasing with every election and it is close to 900 million today with a large percentage being first time voters. Dr. Karandikar wondered aloud if opinion polls have predictive power.

To demonstrate that it the quality of the data and not the sample size that is important in opinion polls, Dr. Karandikar conducted a small experiment to prove that the sample size does not matter in an opinion poll. He added that the objective in opinion polls was to predict the number of seats a political group would win. Dr. Karandikar said that opinion polls, including exit polls, can give accurate results provided the randomness and unbiased nature of the data can be ensured. The size of the ‘sample’ or the number of people surveyed did not matter as long as the quality of the ‘sample’ and of the data could be ensured, he said. Dr Karandikar explained how mathematical and statistical theories like probability coupled with scientific analysis of past electoral behaviour and specific conditions. He however added that opinion poll results were valid ‘as of that date,’ explaining why and how the final election results end up deviating from the psephologist’s predictions for some constituencies or states, when the results are announced.
Predicting the election results is both an art and science, Dr. Karadikar said that random sample data will give the best results when applied over the pre-defined mathematical model, adding that dynamic factors and variables identified over a period of time also mattered. Ensuring the randomness of the ‘sample’, or the people chosen for ‘opinion polls’ and also that their responses were as genuine as they can come, the questions are ‘open-ended’, so as to derive their overall views over an impending election, issues and stake-holders.

With genuine data and domain knowledge over the history of voter-behaviour, in particular packets, mathematical models can help the psephologist arrive at his conclusions. However, the practical problem then arises in the conversion of ‘votes to seats.’ It is here greater domain-knowledge like grassroots-level cooperation between alliance partners, leadership relations at different levels and their personal/political acceptance-level between two elections and anti-incumbency, helps. Victory and defeat has been at times decided by ‘swing voters’, whose behaviour cannot be taken for granted. Post facto, one such error while was notice in the 2016 US presidential polls. The more the number of swing voters, newer parties and personalities, there is room for greater complexity, Dr. Karandikar said.

Some more highlights of the discussion included: pre-election opinion polls were less successful when compared to post – election surveys. On the other hand, pre-election poll results would have a feed-back effect and it has the ability to swing votes. At the same time, too many opinion poll results contradicting one another, their collective impact in influencing swing voters could become negligible on occasions. After the interactive session the meeting concluded with Mr R. Ramkumar thanking Dr. Karandikar for taking time off his schedule to share his thoughts with members on the election scene in India. 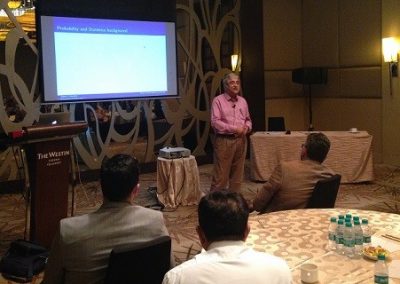 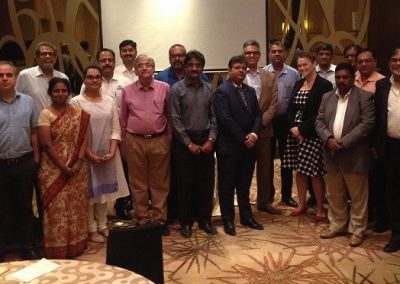