Consul General Hoffman, in her address, spoke about how both regionally, and across the globe, women are at the helm of institutions carrying out effective and inclusive COVID-19 responses, from the highest levels of decision-making to service delivery. From vaccine researchers to public health officials to countless heroes on the frontlines, women are working around the clock to defeat COVID-19. This year she said, marked a historic milestone of women’s leadership — 232 years in the making — with the inauguration of the first woman Vice President of the United States, Kamala Harris. Vice President Harris is not only the first woman, but also the first African American and the first South Asian American to hold that position. CG Hoffman mentioned that for many in the United States, her election represents a significant step toward inclusive leadership. She said how progress for women has not come easily, and it could be difficult to sustain. The COVID-19 pandemic has exacerbated barriers that have held back women—particularly women of color—for generations. Gender and racial disparities in pay continue. A disproportionate share of caregiving continues to fall on the shoulders of women and girls. And now, job losses due to COVID-19 have set women’s labor force participation back to its lowest point in more than 30 years—threatening the security and well-being of women and their families across the globe.

Mr. Chandra Chakraborty spoke about Amway’s role in fostering the large number of women who are business owners and employees, and about how the pandemic impacted businesses, especially women, and the changes that were put in place to handle the disruption. Ms. Susan deCathelineau of Hyland Software, discussed how it has emerged that women have had to bear the double burden of home and work due to the need to change to work from home. She shared some of the experiences her colleagues faced worldwide and discussed measures put in place to make the transition and blending of both easier.

Ms. Aparna Banerjee of Amitie Trust discussed her work with the LGBT community and highlighted how difficult it was for them during the lockdown as they were mostly from the marginalized and economically weaker section of society. Ms. Kasturi Bhattacharya of AlLabs and Data Core Systems spoke about technologies and the future of AI, IoT and machine learning and how in the last year it had accelerated the adoption of digitization at an unimaginable pace. She spoke about the huge surge of work from clients not only in India, but in the U.S. as well, and how coping between the time difference was a challenge for her employees, especially for those working from home. She discussed how her organization supported their employees during the lock down, especially women who came from extended families and where workspace was a big issue with children also having to do online lessons. 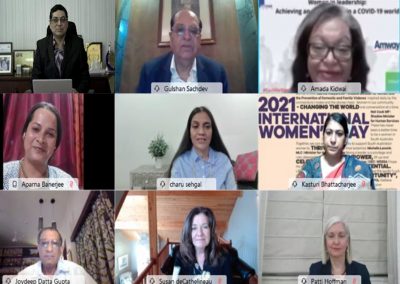