The ‘Uttar Pradesh- Mumbai Investors Conclave’ a High Level Government delegation was led by the Hon’ble Chief Minister of Uttar Pradesh, Shri Akhilesh Yadav and comprised of other senior decision makers. The event, supported by AmCham India, was organised by the Government of U.P. and their Knowledge Partner Ernst and Young in Mumbai on September 10, 2015.

The event began with a welcome address by Mr. Alok Ranjan, Chief Secretary, Government of UP. Presentations on ‘Advantage Uttar Pradesh’ played in the backdrop highlighting positives and underling the significance of the state in the country. Pitching Uttar Pradesh as “Umeedon ka Pradesh” Chief Minister Akhilesh Yadav urged industrialists and the film fraternity to not buy into the false perception of the state as created by the media but to see the initiatives encouraged by the UP Government. The event witnessed heads of leading brands in electronics, food processing, dairy, infrastructure, IT, biotech and film industry sectors who have already invested in the state of UP share their experiences and urge other business to follow. Among the many industry leaders who attended the conclave were leaders of several AmCham member companies such as APCO Worldwide India Pvt. Ltd., GE India, Price Waterhouse Coopers Private Limited and Xylem Water Solutions India Pvt. Ltd.

The upcoming Metro Rail Project in Lucknow, the Lucknow-Agra Expressway, the Leather Parks at Agra and Kanpur and the smart city initiates undertaken by the Government were highlighted. The unlimited potential of Uttar Pradesh in terms of business friendly policies, single window online clearances, power supply, surplus skilled and semi-skilled manpower, and a 20 crore population as consumer base markets itself for industrial investment.

The event also had a signing of intent for co-operation between companies and the Government. The conclave ended with a vote of thanks by Mr. Mahesh Kumar Gupta, Principal Secretary-Infrasructure and Industry Development. 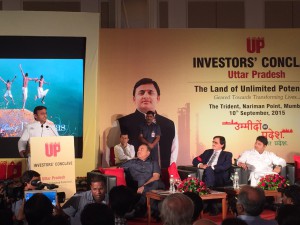 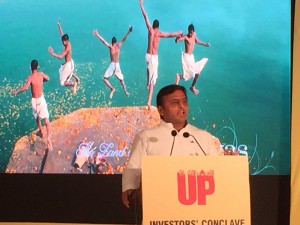