The AmCham Eastern Region and their knowledge partner, EY, hosted a roundtable discussion on “GST – Impact Areas and The Way Forward” on 5th February 2016 at the EY office in Kolkata.

The discussion opened with Mr. Dinesh Agarwal, Chairman, AmCham Eastern Region and Partner Tax and Regulatory Services, EY, welcoming members. He explained the concept of GST (goods and service tax) and said this would be one of the most significant tax reforms post-independence. He said that GST is expected to replace the current complex central and state indirect taxes to recreate a common market for India. He explained that this would also have an impact on prices, business process investment and profitability in all segments of the economy. He said it would also help foreign investors wanting in invest in the Indian markets as the current tax system is a very complex one.

Mr. Siddarth Jain, Executive Director Indirect Tax, walked members through the various segments of the GST and said that it will also entail a shift in the way tax policies are made. He said that an integrated approach was important for business to understand the impact of the proposed changes. He said, “GST will have touch points across critical areas of indirect tax costs, ERP configuration, people training, supply chain re-design, pricing, margins, working capital requirements besides changes in process, controls and accounting. All these would require months of serious engagement from senior management with proactive planning while they continue to operate their existing business.”

The interactive session generated a lot of queries which were explained in detail by both Mr. Agarwal and Mr. Jain. The session concluded with a vote of thanks by Mr. K.P. Sengupta, Director Data Core and executive committee member, who suggested that more sessions on GST are important to help members understand the direct implications. 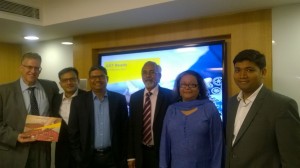