On February 7th, AMCHAM’s Tamil Nadu Chapter held a breakfast meeting with guest speaker Dr. Sunder Ramaswamy, Vice Chancellor, KREA University, on the topic of the need for a liberal arts education. The meeting began with Mr. R. Ramkumar, Chairman – Tamil Nadu Chapter, AMCHAM, welcoming members and setting the tone. He said that during the past two years the focus of AMCHAM has been on the need for improving the ‘infrastructure’ – physical, health, education, logistics, legal, etc. making it conducive for socio economic growth and for the business environment to grow and create jobs and wealth for all stake holders. Mr. Ramkumar added that jobs of the future were leading towards liberal arts and the new private universities in India have begun the reform of India’s education system, which bodes good for the country.

Dr. Sunder Ramaswamy began his address to members by saying that education is the cement to culture. He said that a recent survey revealed that there are only 82 institutions that have been created by man which are over 500 years old and in continuous operation, of which 71 of them are educational institutions. Dr. Ramaswamy said that the invention of the printing press by Johannes Gutenberg in 1439, led to the process of democratization of education and that presently we were in the midst of the 4th industrial revolution with machine learning, IOT, AI amongst other technology advancements. He also said that, if the first Industrial Revolution brought about momentous changes in society as a result of steam induced mechanical power, and the discovery of electricity ushered in the Second Industrial Revolution, the current industrial revolution’s hallmark is “all things digital.”

The key takeaways of Dr. Ramaswamy’s address included 1) Human – machine interaction, where machines are cognitive and beginning to think. Machines not only substitute but take over human tasks. 2) Today, humans live longer, travel longer and build more communities, in addition to virtual travel and virtual communities. 3) There is more of human – human interaction and human – nature interaction and that the world is facing a resource crunch to sustain the 8 billion population. There are more people alive on the planet today than all the people who lived and died till about the 1950’s and this is rising with better rates of life expectancy. The challenges and opportunities of this century are substantially different in scale, scope, and pace.

Dr. Ramaswamy said that in such a rapidly evolving world, liberal arts and sciences equips the youth of today with the tools and perspectives to continually adapt. The competencies that liberal arts and sciences majors emphasize – curiosity (about various disciplines), creativity, critical thinking, comprehension, collaboration, and communication (oral and written) – are all talents and skills that are in ever increasing demand in today’s market place.

Students ought to learn ‘how to learn’ rather than simply ‘what to learn’ – as information is increasingly available to anyone with a smart phone and an internet connection; students should learn how to think through complex problems by looking for solutions from different perspectives; students ought to learn how to interact with different individuals regardless of their gender, caste, race, religion, or class; such students who possess and develop these talents and skills become valuable employees, citizens, and ultimately ‘adaptively versatile’ human beings. He added that the 3 R’s have given way to the 6 C’s.

In this increasingly connected and digital world, STEM skills will remain vital but as noted by many, we also need the expertise of those who are educated to the human, cultural, and social in additional to the computation aspects of living. The study of the ‘human condition’ in a sense becomes ever more crucial as machines become cognitively connected to humans. It is important to understand ‘what it means to be ‘human’; how to communicate with and interact with ‘other’ humans’ and how to develop a sense of empathy. And for all of this, courses in the traditional humanities, literature, social sciences provide those foundations.

Liberal arts and sciences, Dr. Ramaswamy said, prepares students to work in a variety of sectors as it helps them achieve a strong foundation in different subjects and skills. Acting as a stepping stone to different careers, it also helps student manoeuvre out of one career to another. After all a student’s first job is rarely their last—at such critical turning points in one’s career, a person ought to be able to rely and reflect back on the foundational education and grounding received in College on how to cope with such changes. So, a true liberal arts and sciences education prepares you for life! Liberal arts he said gives the student the freedom to choose.

An interactive session was followed by Mr. Ramkumar thanking Dr. Ramaswamy for his insights and the participants for attending the meeting. 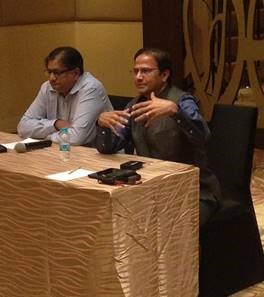