Mr. K.P. Sengupta, Chairman, AmCham Eastern Region, while welcoming the audience pointed out the need for U.S. investment in the areas of education, health and environment. Mr. Sengupta felt that these areas are the foundation of a healthy society. He said that the U.S. is the pioneer in all these areas and collaboration with the U.S. is of extreme importance. He hoped that AmCham in collaboration with U.S. Consulate Office in Kolkata may be able to play an active role in the eastern region.

The chief guest, Mr. Kumar, gave a detailed presentation of all proposed innovative projects of the West Bengal government in the coming years, some of which are in the implementation stage while some are at the proposed stage awaiting approval from the Ministry. His talk covered a wide area of IT strategy for the state that included, inter alia, smart town and going a step ahead smart villages as well. He emphasized the need for digital depository on higher education, research and development to create a central data base system for analysing huge numbers of data. He also touched on the subjects of digitization and paperless office with a major focus on IOE (internet of everything). He also mentioned that West Bengal was the third largest IT provider in India and he hoped that it would become the largest. He discussed a few confident plans for the upcoming Bengal Leads 2017.

Mr. Hall, the U.S. Consul General in Kolkata, in his address said, “There is not a single aspect of U.S.-India bilateral relations not touched by IT. Here in eastern India, several U.S. companies already have IT operations. From Digital India to Start-up India, Stand-up India to Jan Dhan, the National Mission for Financial Inclusion to e-Commerce, digital infrastructure, cybersecurity, cloud computing, and telecommunications, our nations are working closely to move forward together on a wide range of IT issues. With the Government of India recently naming five additional smart cities in our consular district, we will support AmCham’s efforts to promote U.S. business participation in smart cities initiatives.”

The very lively Q&A and interactive session was moderated by Mr. Joydeep Dutta Gupta who said that AmCham would be happy to work with the government to understand the requirements of American companies as they set up or expand their Global Information Centre’s in India. Mr. Gulshan Sachdev, Vice Chairman, AmCham, in his concluding remarks said, “The future lies in big data, technologies, engaging in electronic customer-data-driven innovation using data to find and solicit solutions and thrive on customer intimacy, cloud computing, mobile technologies and in wearable devices. The future lies in embracing technology which continues to evolve along their current performance trajectory. We continue to grow with the times and hopefully without fear hoping that security systems are in place to build the firewall around all vulnerabilities.”

The session was concluded with vote of thanks by Ms. Amada Kidwai, Regional Director – Eastern Region, AmCham. 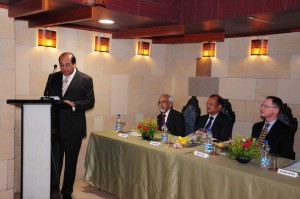 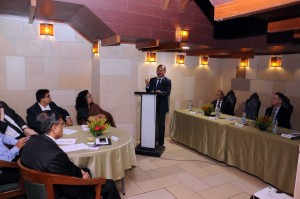 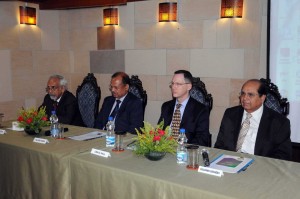 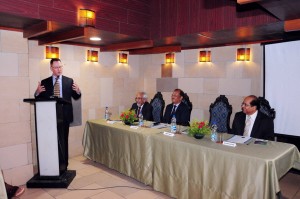 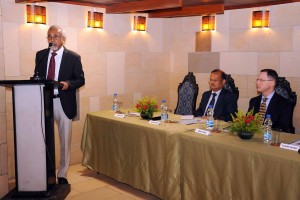