Consul General Pavek, in her address, spoke about how both regionally, and across the globe, women are at the helm of institutions conducting effective and inclusive strides from the highest levels of decision-making to service delivery. She also spoke about her own personal Journey, touching upon her experiences in various fields. Ms. Yadav highlighted the various schemes that the West Bengal Government has put in place for the education of girls in the state in primary, high school and university levels. She spoke about the loans given to families who had girls over the age 18 for their wedding so that their families would not fall into debt traps and most of all she discussed how women/home markers in the state were getting assistance to help them in any way they wanted. She also spoke about her own personal journey, her road to achievements and some of the barriers that were broken.

Ms. Pallavi Singhal, the moderator, spoke about the importance of equality both at the workplace and home, and the importance of breaking the bias in the workplace where distinct roles were in place for employees. Ms. Courtney Conn spoke about the systems Hyland had in place for their employees to help them adjust with balancing working from home and family life. She also spoke about the training programs and hiring mechanisms to ensure a fair and equal opportunity to all. Mr. Sandip Mukherjee spoke about Amway’s role in fostering a substantial number of women who are business owners and employees and about how they helped them readjust to overcome when the pandemic impacted businesses and the changes that were put in place to manage the disruption. Ms. Sohini Paul spoke about how, till a few years ago, women were not allowed in the mining sphere. She said that only a few years ago the government opened this sector to women and it was gaining acceptance. She spoke about her company policy and said that though she was the first women to be employed, there were now many more coming into the sector. Ms. Smaranika Tripathy discussed how the new norms of WFH made it a struggle to balance not only work, but also space for families and highlighted some examples. She discussed how mental health was a real concern and said that the stigma faced in seeking assistance was not only for women but also the males. She gave examples on how she was working to overcome this with her clients and with great patience. She also touched upon how even senior citizens and children were affected during the pandemic. 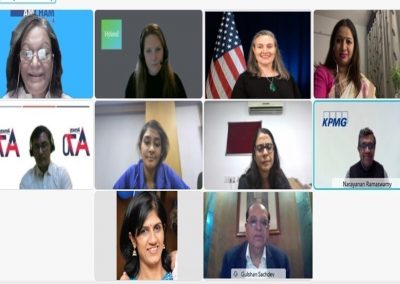