On 22nd February 2019, AMCHAM supported Deloitte’s ‘WorldClass Launch,’ a global initiative towards empowering 50 million lives around the world by 2030—including 10 million women and girls in India. Mr. Punit Renjen, Global CEO, Deloitte, gave an introduction pointing out the importance of skilling India to meet future demands in the wake of the fourth industrial revolution. This was followed by a keynote address by Mr. Dharmendra Pradhan, Minister of Petroleum & Natural Gas and Skill Development & Entrepreneurship, Government of India.

Dr. Vinita Aggarwal, Director General, National Skill Development Agency, spoke about the efforts made by the National Skill Development Agency to improve the current situation in India. She said that they recognize the need of skill training and short term programs, which can really help the youth of the country. She suggested apprenticeship/mentorship programs and local skill training initiatives should be taken up by the industry to help India grow. 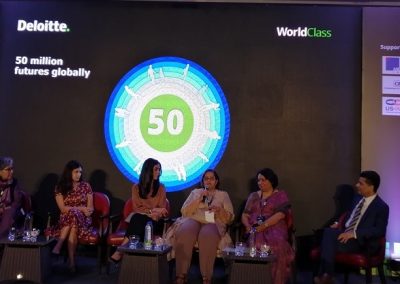