On 12th February 2016, the Government of Andhra Pradesh hosted a smart city meet, in association with AmCham and U.S Commercial Service, in Visakhapatnam. The objective was to facilitate a dialogue on India-U.S. partnerships for the visiting U.S. trade mission delegation and for AmCham member companies. About 45 AmCham member companies participated in the industry-government meet. At the inaugural session, Chief Secretary S.P. Tucker explained in detail the investment opportunities in different sectors in the state. AmCham, represented by Program Director Shivani Raina, introduced the AmCham Infrastructure and Energy Capability Deck which functions as a rich resource base outlining the competitive and cutting edge technologies of 30 American companies with expertise, products, services, know-how and solutions in the field of infrastructure, energy and smart city domains.

Leading the U.S. trade delegation, Ambassador Richard Verma, in the inaugural session said that the U.S. government was also ready to extend its cooperation in the defense and manufacturing sectors. The year 2015 made the bilateral relations of the USA and India reach new heights and he hoped that 2016 would turn out to be year of implementation, he also said that trade between India and the U.S. is expected to reach $500 billion in future, from the present $100 billion.

The Chief Minister of Andhra Pradesh graced the occasion with his presence and witnessed the signing of an MoU between U.S. Trade and Development Agency and the Department of Municipal Administration on funding for drawing up a master plan for Visakhapatnam Smart City, and a consortium of three U.S. companies, comprising of AECOM, KPMG, and IBM. Under the agreement reached between the U.S. and Indian governments, the USTDA would be funding the preparation of a master plan for the smart cities of Visakhapatnam, Ajmer and Allahabad. In the first phase, USTDA would be funding $1.4 million for the master plan for Visakhapatnam.

Speaking on the occasion, Chief Minister Mr. Naidu pointed out that the Indian market provides plenty of opportunities for investment and invited the U.S. companies visiting the city as part of the smart cities infrastructure mission to India to invest in the state. Offering an investor-friendly atmosphere and administration, he said, that the government will facilitate the companies willing to work there. Mr. Naidu said Vizag would be developed into one of the finest smart cities in the country with the assistance of the U.S. offering great opportunities for the U.S. companies. Municipal Administration Minister P Narayana, Panchayati Raj Minister Ch Ayyanna Patrudu, HRD Minister Ganta Srinivasa Rao, Chief Secretary SP Tucker, Commissioner GVMC Pravin Kumar, MLAs, MLCs and a number of senior officials were present on the occasion.

Vizag is one of the 20 cities named by the central government last month under the first phase of the smart cities program. 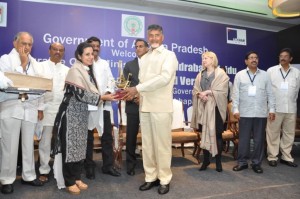 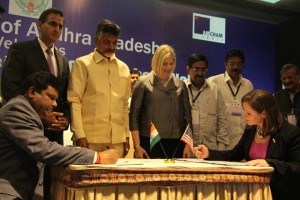 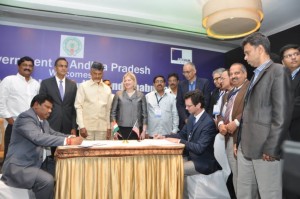