On 29th July, AmCham members met with the Deputy National Security Adviser for International Economic Affairs (DNSA) and Deputy Assistant to President Barack Obama, Mr. Adewale “Wally” Adeyemo, the Special Assistant to the President on International Economic Affairs, Mr. Him Das, and his team comprising of the Director, National Security Council and representatives from the U.S. Embassy, New Delhi.

Members discussed the challenges faced in doing business and key improvements in past year with the present government in defense, aviation, infrastructure, investment, smart cities etc. It was also discussed what is holding back infrastructure investment in India and how American companies can be more competitive compared to local and third country competitors. The current work force in the country, the effectiveness of U.S.- India economic dialogue structure, and its impact in advancing U.S. industry priorities was also mentioned. 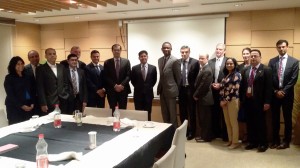