On February 18th in New Delhi, Congressman Ami Bera, Chair of the House Foreign Affairs Subcommittee on Asia, the Pacific and Non-Proliferation and Democratic Co-Chair of the India Caucus in the U.S. Congress and Congressman George Holding, the Republican Co-Chair of the India Caucus, met with AMCHAM members in the defense and healthcare sectors during an AMCHAM-USIBC joint closed door roundtable. Members shared with the Congressmen their growing concerns in the sectors and sought support in getting the concerns heard through the right channels.

Both lawmakers promised bipartisan support to growing ties between India and the U.S. in diverse areas including trade and commerce, defense and strategic affairs. They also shared positivity in the hopes of India and the U.S. sealing the much anticipated trade deal soon. 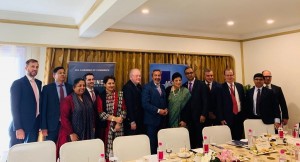