AMCHAM’s Eastern Region hosted a virtual farewell on June 18th for Consul General Ms. Patti Hoffman, U.S. Consulate Kolkata. In her farewell address Consul General Hoffman said, “as I prepare to bid farewell to Kolkata, thank you for giving me the opportunity today to reflect on the growth of the U.S.-India relationship and to express my deep appreciation to the American Chamber of Commerce, Eastern Region chapter, for your valued partnership in strengthening bilateral economic ties in eastern India. It has been an honor to serve as the Consul General of the U.S. Consulate in Kolkata, and very fulfilling to experience first-hand, the bilateral cooperation in action during my tenure. There is no relationship in the world that is as broad, complex, and rich in substance as the one between the United States and India. India is a key partner in our efforts to ensure that the Indo-Pacific is a region of stability, peace, and growing prosperity. We continue to cooperate closely at the highest levels of government on many fronts, including defense, counterterrorism, Indo-Pacific cooperation, climate change, energy, trade and investment, the environment, health, education, science and technology, agriculture, space, and oceans. President Biden has placed a high priority on maintaining and strengthening the excellent U.S.-India relationship. We’ve seen this already with the visits of Secretary of Defense Austin in March, followed by Special Presidential Envoy for Climate John Kerry in April, the phone calls and virtual meetings between President Biden and Prime Minister Modi, and most recently, the visit of Indian External Affairs Minister Dr. S. Jaishankar to Washington, D.C., the first cabinet-level visit from India to meet the new Administration.

Just as India came to our aid when our own health care system was under tremendous strain last year, the United States stands with India now. The U.S. Government rapidly deployed several planeloads of lifesaving supplies to India over the last month through USAID. From the onset of the pandemic, public health scientists from the U.S. Centers for Disease Control and Prevention – known as the CDC – have supported India’s COVID-19 field response working hand in hand with the Government of India and partner institutions across the country. USAID too has been deeply involved in working with the Government of India and several state governments in east and northeast India to strengthen their existing healthcare systems to respond to the COVID-19 surge. Our COVID-19 collaboration builds on more than 70 years of partnership and cooperation in the public health, biomedical, and behavioral health fields. President Biden has announced that the United States will share 80 million doses of our vaccine supply with the world. He further announced on June 10th, the United States will purchase a half billion doses of the Pfizer vaccine to donate to nearly 100 nations that are in dire need in the fight against this pandemic.

Annual bilateral trade in goods and services with India more than doubled over the last decade, from $60 billion in 2009 to $146 billion in 2019 (the last year for which combined goods and services data is available). Overall, U.S.-India trade has increased, and commercial ties have deepened despite the COVID-19 pandemic. United States Trade Representative Katherine Tai and Minister of Commerce and Industry Goyal have discussed our important trade and investment relationship.  They have committed to strengthening cooperation on shared objectives and to revitalize engagement through the U.S.-India Trade Policy Forum, with Ambassador Tai stressing the critically important issues of digital trade, intellectual property, agriculture, labor, and climate and the environment. Looking ahead, we are keen to expand our economic and commercial relationship and support recovery in both our economies in a manner that reflects our shared commitment to a free, open, and prosperous Indo-Pacific region.  Let me reiterate my thanks for the work that AMCHAM and each of your member companies does to enhance our economic ties and the links between our people.  It was my pleasure to interact with all of you on many occasions over the last three years.”

Ms. Amada Kidwai, Regional Director, gave the introductions and mentioned Ms. Hoffman had, during her tenure, truly integrated with all segments of the Kolkata and Eastern Region society. She also welcomed Mr. Marc Kehoe, the Regional Security Officer of the U.S. Consulate in Kolkata. Ms. Ranjana Khanna, Director General CEO, AMCHAM, in her remarks thanked CG Hoffman for all her support to AMCHAM’s Eastern Region and its members especially, during these very difficult COVID times. Mr. Marc Kehoe, Regional Security Officer, U.S. Consulate General Kolkata, spoke about OSAC to explain the partnership between the U.S. Department of State and private-sector security community that supports the safe operations of U.S. organizations overseas through threat alerts, analysis, and peer network groups.

The welcome address was given by Mr. Gulshan Sachdev, Chairman – Eastern Region, AMCHAM. Mr. Sachdev said that during the tenure of CG Hoffman she supported and participated in all major AMCHAM Eastern region initiatives extended support to the American businesses during lockdown. He said that she also shared the World Bank S105 million project to improve water transport infrastructure, given Kolkata’s strategic location, which was extremely helpful.

Mr. Debdas Sen, National Executive Board Member, AMCHAM; Mr. Surjit Banerjee, Past Chairman – Eastern Region, AMCHAM and Mr. Ajeya Bandopadhyay, Executive Committee Member – Eastern Region, AMCHAM, spoke about their interactions with the Consul General and her the contributions to AMCHAM and Eastern India during her tenure. Mr. Joydeep Dutta Gupta, in his concluding remarks and vote of thanks, spoke about the support CG Hoffman had provided to AMCHAM and her love for the city and its people. He wished her well in her new assignment. 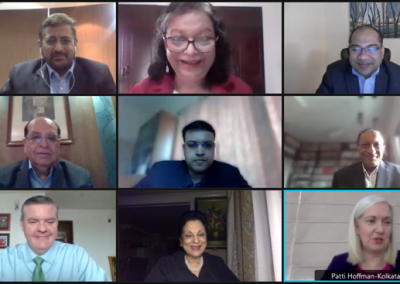