On February 28th, AMCHAM’s Eastern Region hosted two sessions in Kolkata. In session 1 on the U.S. Department of State Overseas Security Advisory Council (OSAC), U.S. Consul General Patti Hoffman, U.S. Consulate Kolkata was the chief guest. CG Hoffman, in her opening remarks spoke about the value of OSAC to American business overseas highlighting its global reach for security professionals worldwide. She encouraged American businesses in Kolkata to become members of OSAC so that they could get the benefits of membership and receive the security updates issued by the U.S. government. The Regional Security Officer, Mr. Patrick Bashor, gave a presentation on OSCA. He mentioned that the U.S. Consulate was setting up a regional council in eastern India to service American business in the region and emphasized the need for companies to register. Mr. Subrata Bagchi, Chairman – Easter Region, AMCHAM and President, TCG Digital, gave the welcome address and Regional Director – Eastern Region, AMCHAM, Ms. Amada Director did the introductions.

Session 2 was themed ‘The Future of AI’ being such a pertinent topic in today’s world when man and machine confluence is no longer an imagination but a reality. Some of the eminent researchers and practitioners in the field of AI participated in the discussion: Dr. Sandipan Sarkar, Distinguished Engineer, IBM, Dr. Arpan Pal, Chief Scientist, TCS, Dr. Utpal Garain, Prof., Indian Statistical Institute, and Mr. Prasun Nandy, Partner and AI Leader, PwC. The speakers debated on the mindset of the organizations in India towards AI from the perspective of adoption, performance and risks. The discussions dove into the details of the current areas of AI application, the need for integration of machines/IoT to feed data, the necessity to develop technologies becoming less hungry for data and resources and finally a reality check on the journey of AI to its nirvana stage of ‘General Intelligence.’

During the Q&A session, some of the following questions were discussed: What drives us towards AI? Is it the pursuit of happiness? Is it the quest for immortality? How our relationship will change with machines as they become more intelligent? Would they ever be true sentient beings? Overall, the session had a great take away for all attendees in the field of AI, with a request from members to do a full day session on AI. Mr. K.P. Sengupta, Executive Committee Member – Eastern Region, AMCHAM and Co-Chairman, Data Core Systems, gave the concluding remarks and vote of thanks. 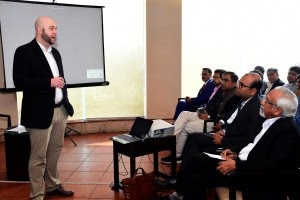 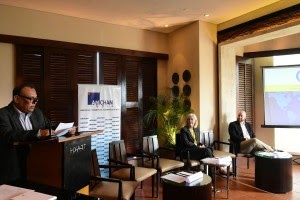 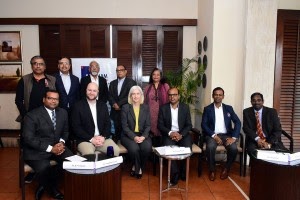 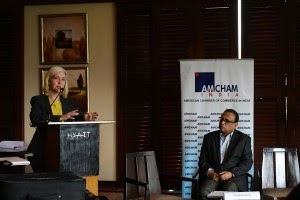