AMCHAM, under the aegis of its HR Committee, organized a conference on ‘Implementing Progressive Labour Reforms and Skilling for the Neo Normal’ on August 23rd at Hotel Leela Palace, New Delhi. The conference had two focussed panel discussions namely ‘New Labour Code and Implications on Corporates’ and ‘Reimagining the Indian Skilling Ecosystem.’ Mr. Sunil Barthwal, Secretary, Ministry of Labour and Employment, Government of India gave the special address in ‘New Labour Code and Implications on Corporates’ session. In his address, he reiterated the importance of the new code for the entire country, both workers and industry. Simplification, rationalization and modernization were identified as the key rationales behind the new code. He also spoke about ensuring ease of doing business for employers and ease of living for workers and how it is paramount in increasing workers’ productivity and well-being. He highlighted the newer provisions of the code which includes provision for gig and platform workers, an entire code on social security, OSH code as a safety net for the workers and decriminalizing the code, amongst others. Labour Secretary stressed on the need for a change in the mindset and adopting new ideas. He spoke about how AmritKaal is going to be a game changer for the country and urged participants to conceptualize the nation as a developed nation which includes elevating the labour standards to global levels. While speaking about issues the industry is facing, he talked about the gig and platform economy which is poised to grow exponentially and the need to find ways and means to address all the potential challenges. Orientation of policies to have provisions for flexi working hours especially for the female workforce, part time job seekers and maternity provisions were also discussed. He appealed to the American companies operating in India to be the torch bearers of innovation and to bring in the best HR, industrial and labour policies.

An industry panel discussion followed with Mr. Chirag Baijal, Co-Chairman – Energy Committee, AMCHAM and Managing Director, Carrier Airconditioning and Refrigeration Limited, Ms. Smriti Sharma, Head, Public Policy (Operations), Amazon India, Mr. Samit Ray, Regional Director – Government Affairs & Public Policy South Asia, Raytheon Technologies Corporation and Saraswathi Kasturirangan, Partner, Deloitte India. Saraswathi Kasturirangan gave a comprehensive presentation on the new labour codes which can be viewed HERE. The panelists discussed a variety of issues that included acknowledging the code as progressive and in sync with the new models like social security for gig and platform workers. They also pointed out the necessary interplay between central and state codes as most state codes are under the shops and establishment acts which contradicts OSH code but the industry is hopeful that these issues will fade away with time. The panel also touched upon labour arbitrage, comparative, digitization of code, safety and security of migrant workers and women workforce, especially at the shopfloor levels. The new definition of wages was also discussed and the related asks from the government. In his concluding remarks, Mr. Barthwal spoke about the importance of congruity between the central and state laws, compliance mechanism, unique authentication IDs, India’s comparative labour advantage, importance of soft skills, increasing women participation in the labour force to 50%, focus on health in the new code, flexibility in remuneration and the need to foster job creation.

Mr. Rajesh Aggarwal, Secretary, Ministry of Skill Development and Entrepreneurship, Government of India gave the special address in the next session on ‘Reimagining the Indian Skilling Ecosystem.’ He spoke about the ageing global population vis-à-vis India’s favorable demographic dividend for the next 25 years. To maximize advantage, it would be imperative to have a strong economy and enough opportunities for the youth who are educated and adequately skilled. He spoke about the work done by industry by way of their research and development centers but the success also depends on the levels of education. While sector skill councils, CSR spends and establishment of training centers were regular ways of government – industry interaction in the skilling space, Mr. Aggarwal also suggested increased participation of industry in curriculum finalization which will ensure greater employability. He shared about the increased engagements between the education and skill ministry and encouraged the government, industry and academia to collaborate and work together for more in the education and skilling space. He shared some of the engagements between the government and U.S. IT companies and urged non-IT companies to also come forward and work more in this space. He concluded by saying that the power of the youth population should be used as an opportunity for the country’s growth.

This was followed by a moderated industry panel discussion with Dr. Ravi M. Bhatkal, National Executive Board Member, AMCHAM and Managing Director, India, Element Solutions, Inc. & Cookson India Private Limited, Ms. Pooja Mehra, Employee Skilling Leader, Microsoft Corp. India, Mr. Samrat Sarkar, Director – Human Resources, Boston Scientific India, Ms. Shobha Pandey, Talent Management Leader, John Deere and moderated by Dr. Kiranmai Pendyala, Co-Chairperson – HR Committee, AMCHAM and Head of HR, India, Western Digital. Dr. Pendyala, in her opening statement, spoke about the convergence of skill development and entrepreneur ability. She also highlighted a major industry paradox where there is a large contingent of job seekers on one side and employers seeking skilled resources on the other side. She requested the government’s intervention in establishing skill clusters closer to industry and have modules for five necessary future soft skills that include – trustworthiness, team work, communication, analytical thinking and people management. On the technical side, necessary skills include – tech design, accounting and audit, IT, digital privacy and security, business analysis and strategy. she also applauded the government for the new education policy which helps in the convergence of the future of education and future of work. The panelists discussed lessons from the pandemic and impact on work, workforce, and workplace virtual readiness, digital first selling, increased compassion, workforce migration to semi-urban/rural parts of India and implications on skilling, scalability and implementation of projects, implications for continual learning and skilling in a professional’s life, education as multi-dimensional, upskilling the worker, upsurge in the start-up ecosystem in India and implications on skill pool availability, redundancy of skills in the next decade, rapidly evolving skill set and emergence of digital skills. The Q&A session covered topics like the need for training closer to industry or within industry, upskilling the existing skill set, short term courses, skill wallet, increased triangular collaboration between the government, industry and academia, importance of vocational subject in school education, industry to share videos and content online to facilitate learning and skilling and high value addition happening through offshore and global jobs. 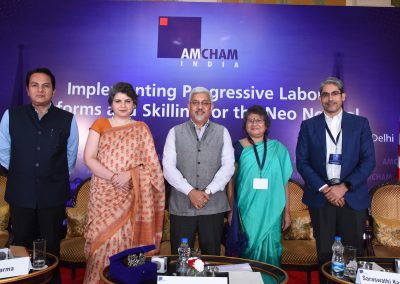 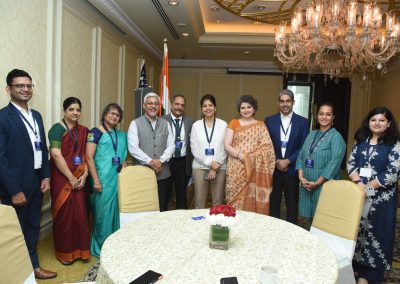 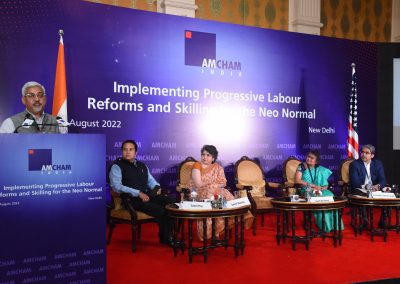 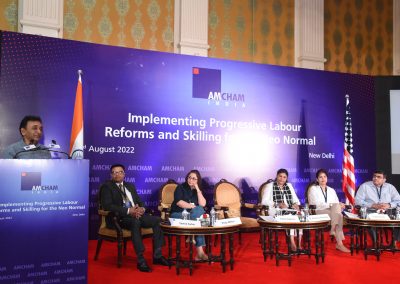 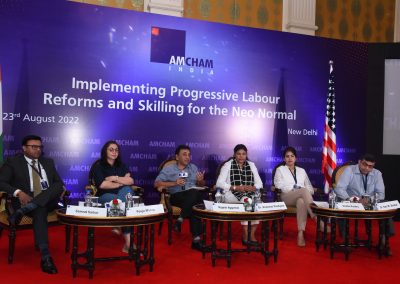 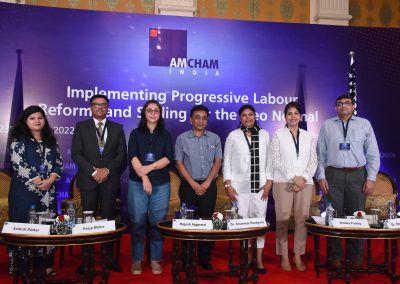 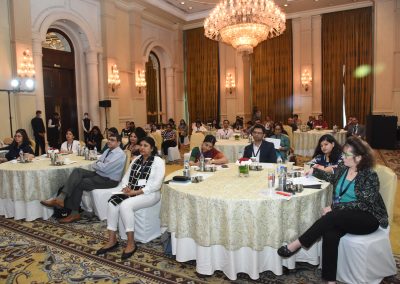