Dr. Mukerjee spoke on the macro economic impact and its relevance in achieving the six pillars of the budget proposals for 2020-21. Health and well-being, reinvigorating human capital, physical and financial capital and infrastructure, innovation and R&D, inclusive development for aspirational India, minimum and maximum governance. He spoke about the Indian economy being negatively impacted by an unprecedented health crisis, with the highly contagious coronavirus spreading across the country. He said that the budget had envisaged a substantial jump in capital expenditure that has a strong multiplier impact on the economy. He spoke about the focus on infrastructure and rural sectors which are the backbone of the social economy and provides major impetus to industry in the long term. He said that the government raising the FDI limit to 74% in the insurance sector would help in attracting greater overseas capital inflow to help enhance insurance penetration in the country.

Mr. Kaushik Mukerjee covered various indirect tax proposals. He said there was no change in any of the tax slabs. The burden of taxation on small taxpayers eased by increasing rebates. Faceless assessment and faceless appeal was introduced. For senior citizens over 75 years of age and having only pension and interest income would not need to file their returns with a rider that the process was very cumbersome. The other areas he mentioned included: reducing disputes, simplifying settlement, relaxation to NRIs, incentivizing digital economy, relief for dividend, attracting foreign investment for infrastructure, supporting ‘Housing for All,’ tax incentives to IFSC in GIFT City, ease of filing taxes and labour welfare. Mr. Gopal Agarwal covered the indirect proposal covering GST. He explained several measures have been taken to further simplify GST. He touched upon custom duty rationalization, electronic and mobile phone industry, iron and steel, textiles, chemicals, gold and silver, renewal energy capital equipment, MSME products and agriculture products. 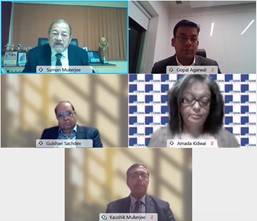