Ms. Arun requested candid feedback from members regarding their experiences from the recently concluded DefExpo 2022 organized by the Defence Exhibition Organization (DEO), Ministry of Defence, Government of India. Members shared their positives from the show while reflecting that advance notice would have been helpful to plan better. Members also shared their views and reservations to a repeat of a similar format during upcoming Aero India 2023, the format that might be followed and how they could plan a better execution. AMCHAM’s coordination at industry events and success on meetings with officials that could be confirmed within the window of opportunity was appreciated. Points that could be taken up with Defence Secretary Giridhar Aramane, post his recent appointment at the Ministry of Defence were discussed. Prospective meetings with other senior ranking officials and the agenda to be raised were discussed. Refinement of the AMCHAM-KPMG defense document focussing on different verticals was a topic of conversation. It was decided that the next meeting would be in January 2023 with perhaps a hybrid one in the interim, if necessary. 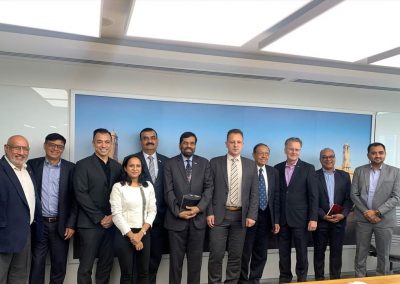