On 22nd January, 2016, in Kolkata, the U.S. Consul General, Mr. Craig Hall, hosted a meeting at his residence with members of AmCham on Corporate Social Responsibility (CSR). He opened the meeting by welcoming members and asking about the initiatives that American companies in the eastern region are driving. Mr. Deepak Jolly, CSR Committee Chairman, AmCham, attended the meeting and explained the function of the CSR committee and the role Coca-Cola undertakes both in India and globally.

Mr. Dinesh Agarwal, Eastern Region Chairman, AmCham, and Mr. Ashish Sen, member of AmCham’s Eastern Region Executive Committee also spoke about the law that govern the CSR activities and the issues involved. They explained that under the Companies Act, 2013, any company having a net worth of INR 500 crore or more, or a turnover of INR 1,000 crore or more, or a net profit of INR 5 crore or more, has to spend at least 2% of the last 3 years average net profits on CSR activities, as specified in Schedule VII of the Companies Act, 2013. They gave examples of their own corporation activities. Representatives of Deloitte, KPMG and Genpact were also present and spoke about the various aspects of the CSR activities their organization have undertaken. 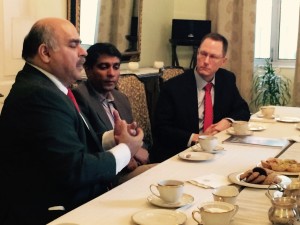