The meeting was called to order by Mr. Ramkumar, who in his opening remarks spoke about how the U.S. Consulate and the FCS has supported AMCHAM in many events and in escalating some of the legacy issues with the state government. He thanked Mr. John Fleming for his support and wished him all the very best in his new assignment in Myanmar. PCO John Fleming began by mentioning that during his work association with Mr. Patrick Santillo, Minister Counselor for Commercial Affairs, U.S. Embassy, he has picked up the theme of ‘Three Universal Truths’ which he would relate to his experience in south India.

The First Truth: He was unprepared for India, ‘we think we know, but we don’t.’ Mr. Fleming added that diversity in south India is amazing – there are different languages, culture, food, clothing, geography, landscapes, all of which he discovered and learnt during his tour of duty here. His work required a lot of business trips across south India, unlike in his earlier posting at Osaka, where he made probably made only 3 or 4 trips a year. The Second Truth: India is a beautiful country and its tourism slogan ‘Incredible India’ is true. The country has much to offer with its beaches, rain forests, jungles, deserts, mountains etc. Mr. Fleming added that sadly, clean India is not something he experienced, the view from a hilltop near Mysore was beautiful, but the amount of thrash strewn everywhere was disappointing. Graffiti on monuments and even in rock caves made him sad, he added. As part of work, he made extra efforts to emphasize on a clean environment as part of the CSR efforts of companies in the programs he attended. Mr. John Fleming stated that some of the parameters on his performance ratings included clients assisted; exports transacted; business successes among other are important. He mentioned ‘tree planting’ as an important activity and said that this is a great tradition in India. The Third Truth: Indian food is very spicy and that there are so many varieties of spices added to the food to make it distinctly flavored. India has an amazing array of sweets and his favourite is the ‘gulab jamoon.’ Mr Fleming said that, ‘life is a journey and it is not about the places you visited, but about the people you meet.’ Mr. John Fleming observed that his tenure in Chennai was a turbulent period in the city’s history. First it was the unprecedented floods in December 2015, when he had to move his family to a safe zone, then two cyclones and now a massive spell of drought. Then there was the passing away of a popular Chief Minister of the state which caused a great outpouring of grief among the people.

Mr. John Fleming thanked AMCHAM for its continuous support and some of the instances he recalled included the trade mission to Colombo; the Bay of Bengal Business Forum in Port Blair; Smart Cities Trade mission led by Commerce Deputy Secretary Bruce Anderson, informative briefings to visitors from Washington D.C. etc. The Principal Commercial Officer presented AMCHAM India with a citation in recognition of the partnership with the FCS. Mr. Fleming announced that Mr. Jim Fluker will be the next Principal Commercial Officer and would be arriving in early August. He would be responsible for Tamil Nadu, Pondicherry, Kerala, Karnataka, Telangana and Andhra Pradesh. 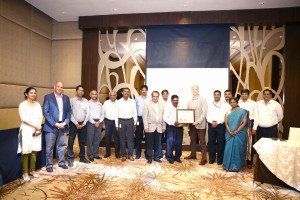 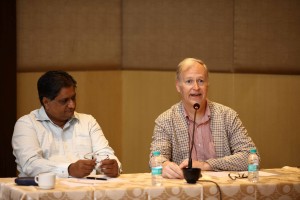 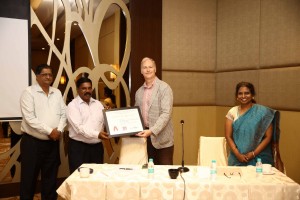 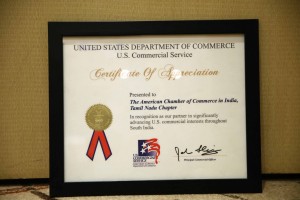