In his opening remarks Mr. Datta said that information technology has been one of the finest creations of the human mind. Stakeholders, in government, corporates, science and technology, consider it their responsibility to guard against it being hijacked by adversaries with their devious and clandestine designs of physical, biological and cyber attacks. Mr. Datta said cyber security has emerged as the fifth most important domain of strategic importance after land, air, sea and space. The internet has become the backbone of commerce and communication which constitute the very lifeline of human existence.

This has brought into play an intense competition to innovate and acquire technologies superior to those in existence. In the process, the technologies have become outdated and also proliferated faster, much to the detriment of interests of regulatory bodies. The newer acquisitions have replenished the armory. Both have compounded challenges for the security management. Besides supervision and monitoring, the task of ensuring safety and security of infrastructures and networks on land and hallow international waters has become indeed very challenging.

Retaining an edge and remaining on top in order to keep the adversaries at bay, has become formidable. Mr. Datta emphasized a bloodless and silent war is, therefore, on round the clock to cause sleepless nights for the management of security. Those who master the technology and the security know-how and skills are considered better equipped.

Mr. Koushik Nath, Sr. Security Architect, Cisco, in his overview of the topic said that we are passing through a time when radical business transformations are inevitable due to disruptions triggered by technology evolutions. As industry is embracing 4.0, the digitization wave is also bringing challenges which were never anticipated! Today, virtually anyone can use malicious programs to attack without even knowing how to write a software program! Over the years, computer attacks have become economically profitable for a large segment of smart people who can penetrate any systems and hack data.

The market of cybercrime business is well over several trillion USD and that’s an attracting proposition. Mr. Nath talked about threats like crypto mining, and emotet which follows the money and mostly bypasses the user/security tool’s attention. In the coming years as more and more things are getting connected to internet, the threat landscape would increase and malicious players will certainly gain grounds. In this increasingly challenging situation, organizations need to work closely with security service providers and build a trusted ecosystem which can work hand-in-hand to reasonably minimize the business risk. Security should be integrated into the organization’s DNA and this can be achieved only when people, process and technology come together.

Mr. Abhirup Guha gave a detailed presentation covering a wide range of incidences and scenarios which could take place and why it was important for a safety net to be in place. He concluded by saying that the cyber threat landscape is ever changing thus making conventional information security mechanisms less impactful each day. New threats like cloud compromise, deep web data breach, easy identity impersonation, and new threat vectors like polycryptominers, hybrid APT with a capability of changing itself from trojan to ransomware based on AI and devices capable to automatically write and execute malware without any user intervention by bypassing DLP are some of the latest threats. The attackers never rest and always pioneer and exploit new technologies, so its crucial to be aware about the latest test threats first, to stay a step ahead of the adversaries. Mr. Joydeep Datta Gupta, Eastern Region Executive Committee, AMCHAM, gave the concluding remarks. 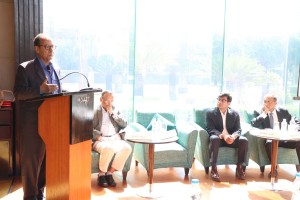 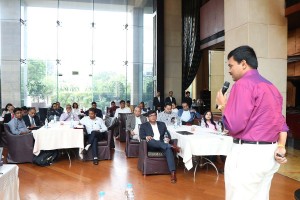 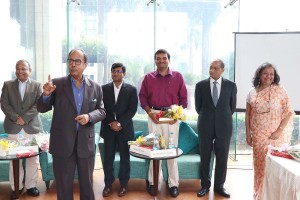 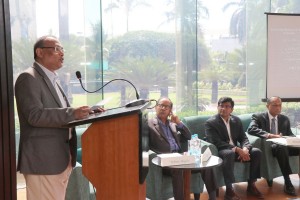