Mr. K.P. Sengupta, Chairman of the Knowledge and Education subcommittee in his opening remarks elaborated on how important it was to implement the Sexual Harassment of Women at Workplace (Prevention, Prohibition and Redresssal) Act 2013to ensure:

A safe working environment at the workplace.
Establishment of Internal Complaints Committees to deal with harassment complaints.
Ensure Confidentiality of complaints.
Organizing Workshops and awareness programs to sensitize the employees.

The Keynote Speaker, Ms. Mira PandeIAS (Retd), stressed upon the importance of this Act and the necessity for all organizations to ensure its proper implementation. She shared personal anecdotes of her own career spanning over 30 years. She mentioned about her experience of handling various situations in the absence of such Acts and guidelines on women’s safety.

Ms. Sonali Dey mentioned that for the first time the Supreme Court of India has recognized that sexual harassment amounts to violation of the fundamental rights of a woman, infringement on her equality, right to life and dignity. She explained that non-compliance of the provisions of this Act is an offence on the part of an Employer. Unlike other criminal offences, courts can take cognizance only when a complaint is filed by the aggrieved woman or any other person authorized by the Internal Complaint Committee of her organization.

Mr. Suranjan Bhanja, Chairman Amcham Eastern Chapter said that the age old evil of sexual harassment of women is a curse of society across the world. Mr. Bhanja emphasised that though this Act will not be able totally eradicate this menace, it will be certainly be a strong legal deterrent.

Mr. Dinesh Agarwal, AMCHAM Eastern Chapter spoke about the necessity of implementing the Sexual Harassment Act which was the result of the finding of the Vishaka Commission.

The Q&A session was very animated and generated a lot of questions directed to both the speakers. 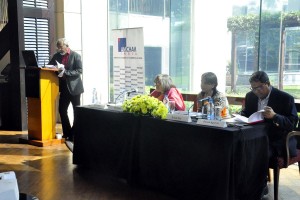 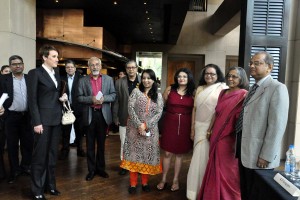