A talk on Cyber Safety and Security: Taking control of our cyber future – 23rd September 2015

Kolkata, September 23, AmCham Kolkata in association with the Public Affairs office of the U.S. Consulate Kolkata organized a talk on Cyber Safety and Security: Taking control of our cyber future.

Ms. Amada Kidwai, Regional Director AmCham Eastern Region did the introductions, Mr. Dinesh Agarwal, Chairman Amcham Eastern Region in his welcome remarks spoke about the importance of safety and security of cyber space. Mr. Andrew Posner, Director of the American Centre introduced Ms. Melissa Hathaway to members present. Ms. Hathaway, former acting senior director for cyberspace at the National Security Council, has joined Harvard Kennedy School’s Belfer Centre for Science and International Affairs as a senior advisor to its cyber security initiative, Project Minerva, a joint effort between the Department of Defence, Massachusetts Institute of Technology, and Harvard University. The project explores a wide range of the issues within cyber security from the contexts of international relations theory and practice.

In her briefing, Ms Hathaway said that modern societies are in the middle of a strategic, multidimensional competition for money, power, and control over all aspects of the Internet and the Internet economy. She spoke about the increasing pace of discord and the competing interests that are unfolding in the current debate concerning the control and governance of the Internet and its infrastructure. Cybersecurity, she said, is a major concern at companies of all sizes and has a measureable impact on many facets of operations, and certainly profitability. Yet the scale of that impact is often obscured or lost in translating the size of the risk and the steps to mitigate it may not be clear. Instead, Hathaway says, the risks need to be translated into a language most directors know well: dollars and cents. She said that in our current state of cybersecurity, breach, crime, disruption and destruction are growing in unacceptable ways. Key indicators suggest that we are not making enough progress and in fact, are possibly going backwards. Hathaway gave an overview of the latest developments in cybersecurity from a US and then global perspective—and discussed what is at stake for companies and nations.

The session was concluded by Mr. K.P. Sengupta who gave the concluding remarks and vote of thanks. The event was hosted by Data Core Systems. 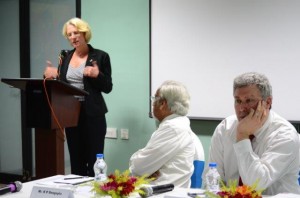 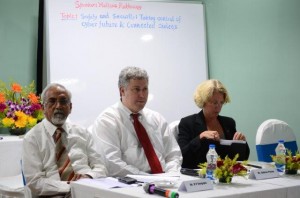