Make in India – Manufacturing for the World

AMCHAM, in partnership with Invest India, held ‘Make in India – Manufacturing for the World’ on February 14th in New Delhi. It was the signature event of AMCHAM’s Manufacturing Committee. Chief guest, Mr. Hardeep Singh Puri, Minister of State (Independent Charge) of Civil Aviation, Housing and Urban Affairs, Minister of State for Commerce & Industry, Government of India, gave the keynote address, in which he gave an overview of the widening and deepening cooperation between the U.S. and India across a vast number of areas such as counter-terrorism, homeland security, cybersecurity, science and technology, health, agriculture, etc. Minister Puri talked about growing urbanisation and construction activity citing that 100 smart cities were under development which included 5,151 projects, thus demonstrating the fast pace of development in smart cities. He mentioned that integration into the global value chains would require strategic decisions to be made and the scaling up of manufacturing to meet global demand. Overall, he expressed optimism on the growth of U.S – India economic relationship and a willingness to resolve issues impacting bilateral business.

The inaugural session began with welcome remarks by Ms. Ranjana Khanna, Director General CEO, AMCHAM, wherein she mentioned that exports would be a key driver for expansion in India’s manufacturing as the world realizes that an alternate manufacturing hub was needed even more so in the current scenario with disruptions to the global supply chain. Mr. Sanjay Koul, Vice Chairman, AMCHAM and Chairman – Manufacturing Committee, AMCHAM and CMD, Timken India, set the scene for the event and emphasized India’s target to be a $5 trillion economy in 5 years with a 25% share of manufacturing which would contribute $1 trillion to the GDP.

In his special remarks and with KPMG as the knowledge partner for the event, Mr. Akhil Bansal, Deputy CEO, KPMG in India, said the foundation for a $5 trillion economy included reviving consumption, creating jobs in labour intensive industries, moving towards tech certainty and improving competitiveness. In the vote of thanks, Mr. Arijit Sen, Co-Chairman – Manufacturing Committee, AMCHAM and Senior Director, Global Government Affairs & Public Policy, Flex Group, thanked the government for its commitment to the Make in India program. AMCHAM presented a memento to Minister Hardeep Singh Puri.

The participants proceeded to attend one of the parallel breakout sessions on I) smart infrastructure and electric vehicles, II) agriculture and food processing or III) electronic hardware and mobiles.

Deliberations focused on regional airports and connectivity, infrastructural requirements for smart cities, India as the world’s 3rd largest auto market in 2021, innovating and implementing the future of mobility from/in India and global best practices for adoption of new technologies. Other topics discussed included end to end policy for EVs, urban planning which includes last mile connectivity, infrastructure development around industrial units and IoT challenges around current requirements to get multiple approvals which slows the pace of adoption of such technologies.

In his special remarks, Dr. J.P. Mishra, ADG, ICAR, Govt. of India enumerated the initiatives taken by the Indian government in doubling the farmers income. He spoke about the cyber agro physical system that will help in AI based advisory to farmers. He also shared how water has taken a central stage in Indian context and agriculture being one of main users of fresh waters, hence the aim is to create an eco-system where water usage goes down by 75%.  Dr. Mishra also spoke on the land tenancy problem where resource pooling and FPOs were emerging as the most feasible solution. The government is also promoting digital agriculture through its chain of Krishi Vigyan Kendras. He also pitched for greater collaboration between the government and the private platers especially in the food processing sector. Mr. Sanjay Dave, Former Chairperson, Codex Alimenatrius Commission, stressed on the uniformity between global and Indian safety standards and advocated for its implementation from the farm fields itself. He discussed the advantages of adopting GAP (good agricultural practices), GMP, GPS, etc. especially in bringing more value to exports. He also asked for an upgradation in the current agri schemes and processes.

The participants discussed five broad areas – AgriTech and its implications, the need for robust agricultural infrastructure, importance of global standards of quality, the growth of food processing industry and marketing and branding of agri produce in India. The key points discussed included the role of FPOs, convergence of all agriculture related schemes, need for greater interventions by the government in AgriTech, rationalization of certain custom duties on imported agri technology, digitization of agricultural land, standardization of agricultural infrastructure and the inherited demand – supply gap, absence of global standards of quality, obsolete schemes  and the dire need to adopt sustainable practices. Industry felt that any scheme, incentive or policy drafted should take into consideration the entire value chain i.e. from the famers to the end consumers.

In ‘Breakout Session III: Electronic Hardware and Mobiles’ Mr. Dipayan Ghosh, Executive Director, KPMG in India, set the scene through discussing on export oriented growth for component manufacturing and the successes Vietnam in this regard. He touched on patents and the need for standards to be in line with the global system. Mr. Arijit Sen, Co-Chairman – Manufacturing Committee, AMCHAM and Senior Director, Global Government Affairs & Public Policy, Flex Group was the conversation facilitator. Mr. S.K. Marwaha, Senior Director/Scientist ‘G,’ Ministry of Electronics and Information Technology, discussed some of the ease of doing business challenges and policy updates on the horizon. From Invest India Mr. Shawn Bhalla and Mr. Ehtesham Khurshid talked about a study they conducted where they have found out that the disabilities in the electronic manufacturing sector was roughly about 8-10%. They encouraged American firms to share their investment plans in India for a manufacturing hub delivering to markets globally.

Some of the points of discussion included the possibility to extend the incentives under SEZs to provide a thrust to the sector, incentives for R&D facilities in India, potential for an industry led task force, strategy for export led growth of electronics, developments in the Phased Manufacturing Program, policy requirements for the growth of component ecosystem for electronics, skill development for high tech operations, time delays at customs for shipments  and opportunities in fab labs.

Post the sector specific breakout sessions, all participants gathered back together for a plenary session on ‘The Road Ahead’ with opening remarks by Mr. Nitin Atroley, Chairman – Economic Affairs Committee, AMCHAM and Office Managing Partner – North, KPMG in India. He emphasized the pertinent flagship programs of the government, Make in India and the Assemble in India, with the objective of increasing share in global trade to 3.5% and a target GDP of $5 trillion. He talked about the need for improving competitiveness of Indian manufacturing, taking advantage of the geo-political situation and bold policy initiatives to catapult manufacturing.

Mr. Deepak Bagla, Managing Director & CEO, Invest India, in his special address said 8 U.S. companies have been operating in India for over 100 years, the foundation of the oldest business relationship. Invest India is looking at 662 active business opportunities for U.S. investments into India with the number of sectors of interest has increased from 11 to 27 sectors. He said Jal Jeevan Mission offered a $51 billion opportunity for U.S. companies and highlighted innovation and start-ups as pillars supporting the U.S.-India relationship.

In his special address, Mr. Sudhanshu Pandey, Additional Secretary, Department of Commerce, Ministry of Commerce and Industry, mentioned that although the trade deal between both countries was still a work in progress, confidence was growing step by step. He said the Commerce & Industry Ministry was meeting regularly to address issues related to India’s competitiveness in manufactured products and services. He emphasized that India was working on globalization index to support manufacturing, services, etc. towards meeting global acceptability through harmonization of standards. While discussing the global shortage of healthcare workers he said Ayushman Bharat offered a big investment opportunity across the healthcare sector in India. The session concluded with Ms. Ranjana Khanna, Director General CEO, AMCHAM presenting a momento to Mr. Pandey and thanking Flex for supporting the event. 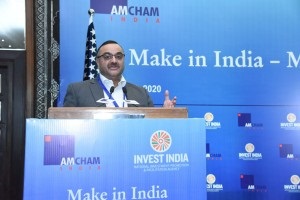 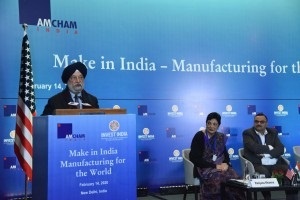 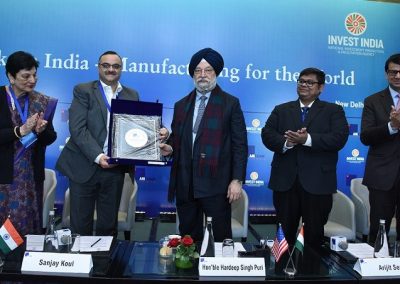 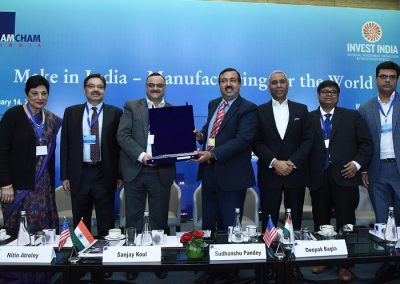