CSR in India: Working Toward Fulfilling the Sustainable Development Goals in India – Moving the Agenda from the Global to National and Local Level 29th September 2016

CSR in India: Working Toward Fulfilling the Sustainable Development Goals in India – Moving the Agenda from the Global to National and Local Level – 29th September 2016

AmCham, in partnership with the Consulate General of the United States, Mumbai, organized ‘CSR in India: Working Toward Fulfilling the Sustainable Development Goals in India – Moving the Agenda from the Global to National and Local Level’ in Mumbai on Thursday, 29th September 2016. The event was sponsored by Bank of America and Johnson and Johnson Medical India. The convergence of key stakeholders in the CSR domain -corporates, NGOs and the government, culminated in a deeper understanding of significant perspectives to the subject.

The Q&A session brought out interesting insights and experiences of CSR best practices and sustainable development by both industry and NGO representatives. The event concluded with a vote of thanks followed by lunch. 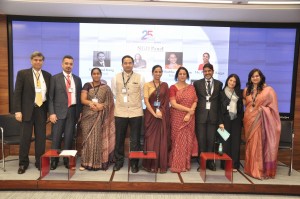 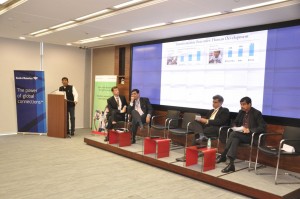 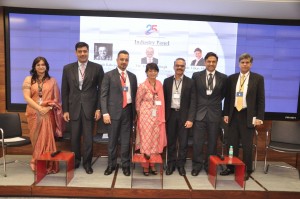 How can we ensure innovation, competitiveness, increased income and a better quality of life? The answer, surprisingly, lies in manufacturing. The link between manufacturing and economic growth is critical. Manufacturing investments create ripples across the economy, creating jobs and growth in other industries. Throughout industrial history, at the core of any thriving economy has been a flourishing manufacturing sector. Manufacturing industry in India has gone through various phases of development over the period of time and promises to be one of the high growth sectors in the coming years.

Gone are the days of grimy smokestacks and oily rags, the biggest changes to the factory of the future will come from technology? Manufacturers have focused on innovation since the first assembly line was established. Every manufacturer understands that the primary way to differentiate its products is to deliver more customer-focused innovation than the competition.

We know about best practices, but what we really need to think is in terms of next practices and adoption of technology. It is estimated that more than 50 billion machines will be connected to the Internet by 2020. The Internet of Things (IoT) has already redefined and transformed every aspect of how we live and work. As it evolves, IoT promises a new era of automation and data-driven decisions to create new business processes and revenue models. Industrial internet on the other hand is expected to grow about double the rate as consumer internet.

Mr. Vivek Mehrotra, a member of the GE team that developed Predix, made a very passionate and powerful presentation on how Predix would change the way industry operates. Predix, is a powerful new software platform developed by GE specifically to connect people, data and machines over the industrial internet.

Predix as a cloud-based PaaS (platform as a service) is claimed to enable industrial-scale analytics for asset performance management (APM) and operations optimization by providing a standard way to connect machines, data, and people. GE expects Predix software to do for factories and plants what Apple‘s iOS did for cell phones. The software was introduced to the market and made available to all companies in 2015. Built on Cloud Foundry open source technology, Predix provides a microservices based delivery model with a distributed architecture (cloud, and on-machine).

To encourage industry innovators to use the Predix platform, GE has opened Predix to other software developers. Predix is also a technology platform, not deployed on a phone that you hold in your hand, but rather behind the closed doors of a data center connected to data lakes and other forms of big data storage.

Predix could also be deployed in the cloud to make it more widely accessible and available. There’s even a version that can run on machines like jet engines, gas turbines, and locomotives. But it’s all there to do the same thing – to run apps that allow us to do big data analytics, monitor machines remotely and have them ‘talk’ to each other. Like the cemented train platform, it provides a stable and scalable way to quickly develop and deploy new applications. Using Predix would increase efficiencies in the way we do business as it shares a common base, is scalable and has features that can be tweaked to suit a wide array of operations and run big data analytics. This translates into faster value for customers.

What makes GE so unique is the installed machine base within GE which has given the Predix developers, the deep domain expertise of the engineers that built them, tightly coupled with a global network of data scientists. To do this right, the GE team used the physics-based analytical skills of the engineers who understand why something is happening. Secondly, the data scientists who, like miners of minerals, go deep down into the lode of data looking for valuable things to surface. They look for patterns and connections that we may have not even thought about. It’s this marriage of the physical and digital that creates the most powerful result.

Predix is a marriage of operational technology and information technology, or OT and IT. Operational technology (OT), works on data from machines, jet engines, MRIs and turbines that can now communicate this data over the industrial internet. Bringing these two worlds together is analogous to the union of data scientists and engineers. Predix uses OT and IT together to monitor the machines remotely, detect and adapt to changes, and predict future behavior.

With Predix it is possible to check on a machine from a remote location. Predix is a game changer. It gives us the intelligence to tell what’s going on in a machine, whether something’s wrong, and what we can be done about it before it affects our customers. Like doctors, Predix can also use analytics to predict when the machines may fail in the future.

There are apps called Predictivity solutions. They run on Predix just like apps run on a smartphone in a secure, scalable and consistent way. Predictivity apps can also keep an eye on locomotives, collect data about heat and vibration, and predict when you need to perform maintenance or replace parts. There many solutions like this across all GE industries. In fact, this year GE is on track to drive over $1 billion of value from them.

GE has opened up the Predix platform as it becomes more powerful the more people use it. GE will continue using it, but making it available externally will also allow GE customers and business partners to write their own software and become more successful. GE would like Predix to become the Android or iOS of the machine world. Mr. Vivek Mehrotra said that “Predix will become the language of the industrial internet.”

As part of the agenda committee members discussed and reported on (i) brief update on AmCham’s National Executive Board Meeting held in September ’16 (ii) review of recently concluded events in the Western Region (iii) ideation on topical/industry focused events for the year (iv) leveraging on the regions membership network to have a larger outreach and footprint in the WR. The WRC meeting closed with Mr. Mahesh Krishnamurti thanking all members for their active participation.

Members of AmCham’s ICT Committee met with Ms. Angela Simpson, Deputy Assistant Secretary, National Telecommunications and Information Administration, U.S. Department of Commerce, on 26th September, 2016, in New Delhi, to brief her on the main issues/developments in the telecom and IT sectors.

Ms. Angela Simpson was in India to participate in the U.S.-India ICT Dialogue. She informed members about some of the main issues that she was focusing on which included internet policy, IT, broadband, cross border data flow, encryption and security, internet of things, cyber security, etc. 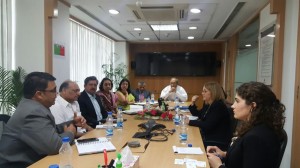 Mr. K.P. Sengupta, Chairman – Eastern Region, AMCHAM and Amada Kidwai, Regional Director – ER, AMCHAM met Dr. Krishna Gupta, IAS, Principal Secretary Commerce & Industry Department and Public Enterprise & Industrial Reconstruction Department, Government of West Bengal, on 22nd September. The purpose of the meeting was to introduce the Chairman of the Eastern Region and to invite the Principal Secretary to interact with members of AMCHAM ER on ease of doing business in West Bengal. Dr. Gupta also highlight the upcoming Bengal Global Business Summit which will be held on 20-21 January 2016. He requested AMCHAM to bring a U.S. delegation to the session.

The efforts under the Clean Energy Finance Task Force are being expanded to include new clean energy finance initiatives for joint collaborations. Ms. Ansari give updates from USTDA’s recent outreaches to the cities of Vizag, Ajmer and Allahabad and apprised committee members on the second phase of smart city expansion programs launched in Vizag, as well as the progress of the smart city master plan in Ajmer and Allahabad. She also informed the committee on the upcoming Smart City Stakeholders’ workshop to be held in Vizag, the Reverse Trade Mission proposed for Ajmer and the Commerce Department’s Conference on Smart Cities. Members were invited to share their views on possible candidates for the Reverse Trade Mission and inputs were sought for engaging with stakeholders in Vizag, Allahabad and Ajmer, during the upcoming outreach.

By joining AMCHAM India, you become part of an active and dynamic American business association with a membership base of more than 400 American companies in India. AMCHAM is an important voice for policy advocacy, a critical source for business intelligence, a vibrant platform for networking and expanding your business.
Become A Member
« Older Entries